The City as Environment 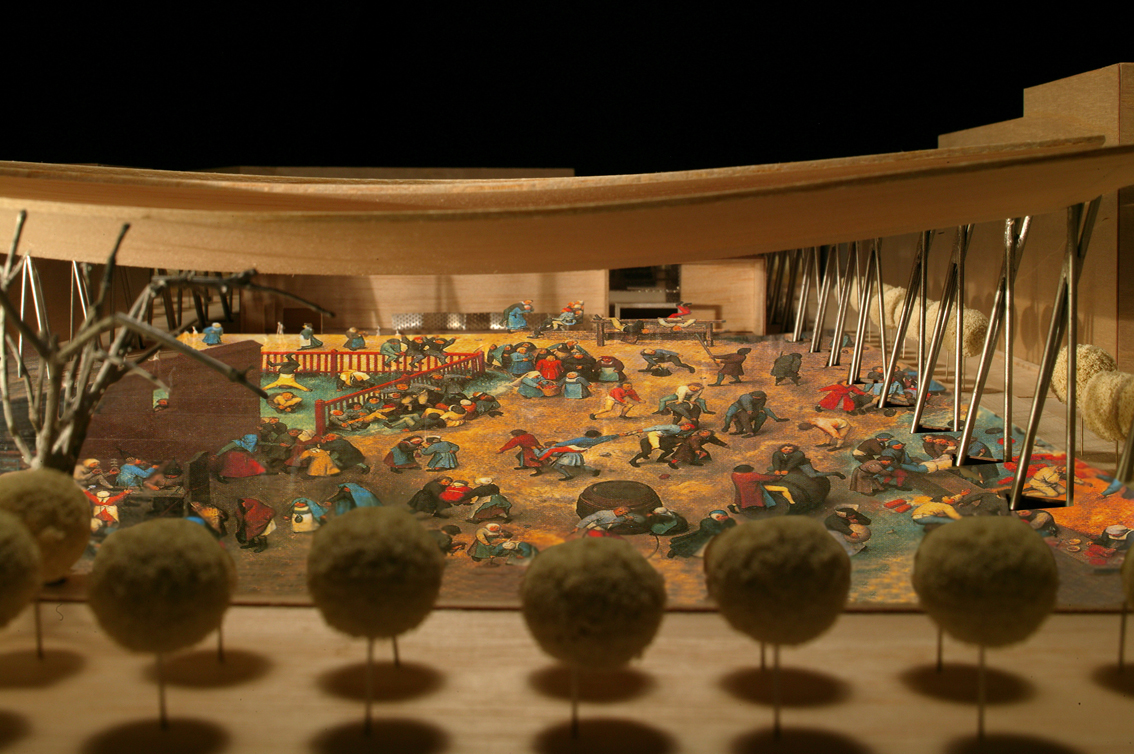 In this image the children of the picture â€œchildrenâ€™s gamesâ€ of Peter Bruegel are displayed below the candles of the space for our project in Plaza de la EncarnaciÃ³n in Seville. There, in a gap that history and its uncertainties had ended up giving to the city what we proposed to be an operation of conservation of that â€œnature reserveâ€. Do not touch. Do not fill. Taking advantage of the occasion and guarding this gifted place that remains without intervention, raw, rough, and in the heart of the historic centre. Our architectonical proposal eluded the insertion of new objects and it concentrated on the creation of an inside, a three-dimensional hall, almost waste, that needed to be protected from the excessive sun during the summer, to warm during the winter, and to provide it with installations that allowed the coexistence of several changeable activities. Architecture would be the lightest as possible as technology allowed. Solidified sails of GRC and peripheral supports as a bunch, with svelte shafts, it would form boundaries to the urban gap preserved and available. A gap where architecture wants to be dissolved, to invite people to movement in a free activity. Like the children in the picture by Bruegel.

Which conditions should offer an urban place of these dimensions to be the support of a performance like the one of Bruegelâ€™s picture, â€œfiercely and with humour[1]â€, in the words of the poet William Carlos Williams? In the picture, it calls our attention the savage support of that kind of square, street or place where the children dedicate themselves to the sample of games. There are not pavements or road surface -it could be a nature reserve- there are no signs of the material that forms it; it is yellow, but, blue and green too. It could be soft or hard, what kind of urban project would allow that ambiguity?

In 1965, the town planner Kevin Lynch published a text â€œThe City as Environmentâ€, where he proposed strategies to fight against what he calls the four disadvantages of the modern city: the perceptive tension, the lack of visual identity, the illegibility, and finally, its â€œrigidity, lack of sincerity and franknessâ€. For this last of the disadvantages, Lynch extraordinarily proposes it and in some way it is libertarian. He reclaims for the modern cities the existence of reserves of spaces that â€œthey donâ€™t have to be nice nor beautifulâ€ but they should be accessible and opened, provocative and fascinating, and to answer to the human effort that interrogate them. It would be a physical flexible framework, â€œin which it can be located opportunities of isolation and risk, and with some kind of ambiguity and richnessâ€. In the fan of possible places to offer with this quality, among others, are the recoletos passages, the uninhabited buildings, dumping sites, allotments and even the works in construction or the empty spaces, with or without junk.

Without saying it, Lynch does no more than an inventory of the ideal places to fulfil the imaginative adventurer of the children and their games, physical places that are able to stimulate imagination, interaction and mystery. How would it be the planning of that places? The point of view of the architect may have to discover the hidden potentialities of the urban abandoned spaces or those half made. The possibility of inventing new kinds of squares would be opened, streets, or boulevards without finishingâ€¦Virgins, diffuses, without a defined shape, waste grounds. Any Rule nor Plan gathers today this modality of public space, ambiguous, untidy and without finishing. But, when the cities, in one shape or another, ended up occupying all the earth, we will have to design the way in which we breathe with these biotopes without rules and without a clear destiny.

And, of course, without shops nor market, these adult occupations.