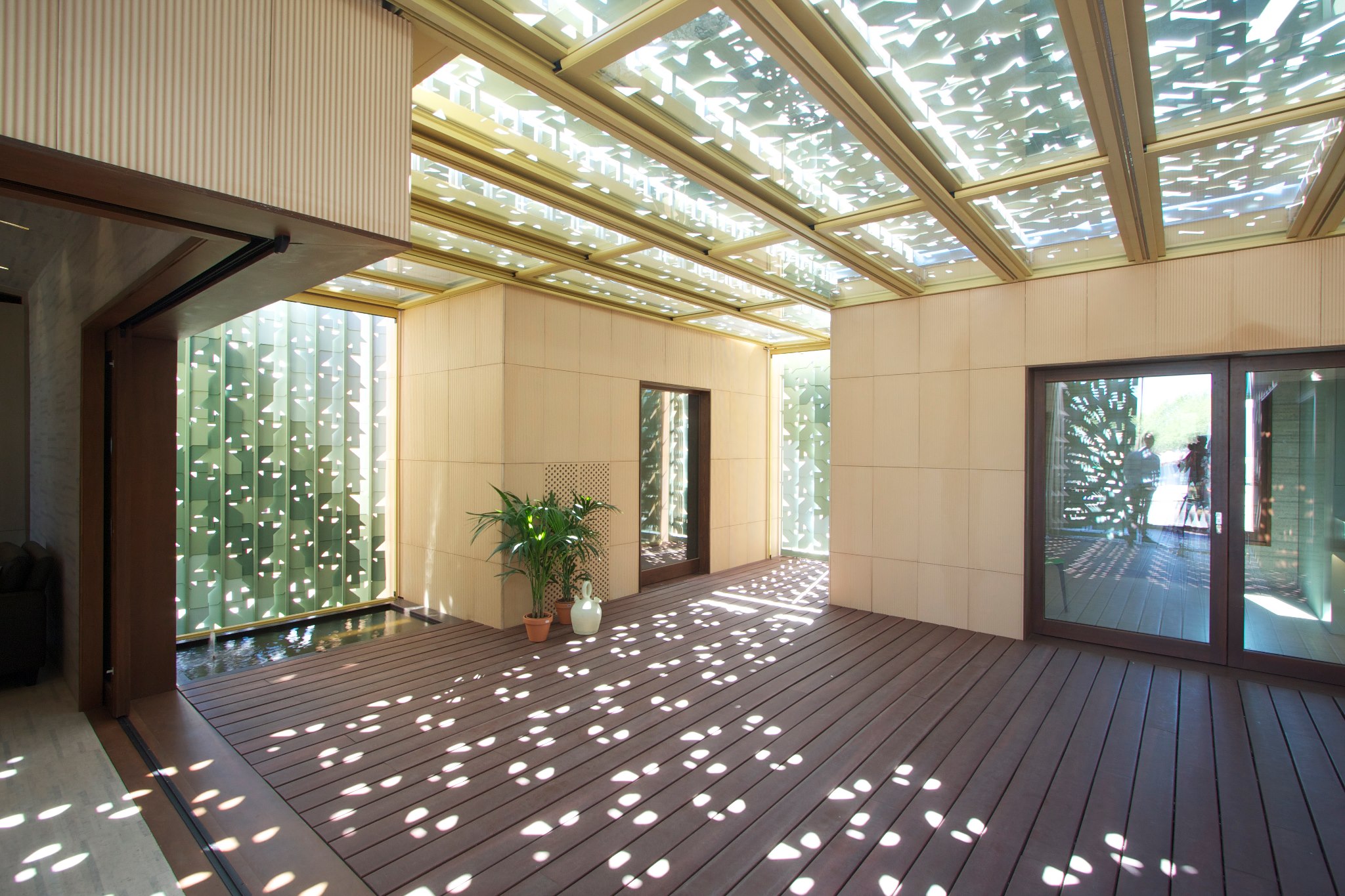 The photographer is reflected on the display cabinet of the bedroom at the moment of taking the picture. Today is Thursday 13 September and we left the courtyard some minutes before, crowded by authorities, after the official inauguration of Solar Decathlon Europe 2012. The Minister of Development and the Major of Madrid chose our house among the nineteen ones proposed from all over the world in order to, with their visit, start the Event.

Hours before we got some earthenware pitchers “botijos” and some flowerpots to furnish the courtyard, and now they are together next to the pond. The word botijos is going to be on vogue these days. It symbolizes our system of evapotranspiration of the ceramic facade. If you observe carefully, the picture above shows evidences of the wet system of the facade. Behind the plants you can see the pieces of pierced ceramic that allow the injection of wet air from a freezer evaporative machine, which would work in case the hot demands it. Finally it was not necessary, the courtyard proved enough.

The glass curtain that on the left is mobile, it folds up according to the required conditions. The visitors did not know that the construction was not finished until the previous night. The company that initially sponsored them backed off at the last moment and then we had to retort to plan B.

The previous morning there we still had to adjust some motors of the glass closure of the ceiling. In the picture the glass closure appears closed, but its usual disposition in the month of September would be open, with artificial leaves downed, simulating a vine.

The previous Monday the decking was finished. Our dwelling was the most advanced one in its building process and the producer of Informe Semanal had promised us that if it was finished by that time, if the courtyard was able to be filmed, we would be the protagonists on its emission. That weekend the team sounded the alarm. All the decking was still to be finished and the â€œdecathletesâ€ had to work hard.

The previous week the predicted deadlines had been accomplished: fixation of the four prefabricated modules completely finished at the garage, assembly of the access ramps, of the pondsâ€¦ There was a nice weather.

A month before we finished the previous assembly of the house at the place of its fabrication: polÃ­gono El Cañamo II, in the industrial units freely given by the Town Hall of La Rinconada. The summer was especially hot, for the desperation of some of the most implicated students, who worked almost twelve hours some days.

The mobile leaves form the artificial trained vine were painted in some green hues in the summer. On the top of the pictre over a base of composite aluminium (sponsored by the provider), all the team (researcher-professors and athlete-students) was summoned one Saturday at the beginning of the summer to paint them in a day, using the strategies of a chain production. That day the strategies and turns of the final production were settled. Nobody was unnecessary and the response on attendance (considering that many came from Málaga, Granada and Jaén) was unanimous.

The outline of the roof (in the picture we can perceive its mustard colour) is specially designed for the prototype. It was not till May when the matrices were adequately extruded. It was an unpredictable delay that had seen the slow but unceasing progress of the habitable modules in the garage. The sponsoring companies were more or less punctual and came in order. At the beginning of the year, the economic perspectives required drastic decisions; the scarcity of public money was confirmed, and the options were two: giving up or attracting private companies as a main support. The decision of choosing the second option had results sooner than later.

The previous year, 2011, the project, its plans, and its details had progressed, and also the agreements between universities, periodical meetings of the team in Antequera and of the supervisors in Seville, the establishment of the central studio in the office of the street Rosario Vega, meetings with the rectors, the first deliveries of the project to the organization, our involvement in Construmat, in Bióptima, in all the possible events to disclose the project…in the autumn of 2010 everything had begun…

The photographer depicts an instant charged with other past moments and reminds us of another occasion, almost two years ago when, on a table, a sketch with four boxes and a green interstice inspired the decision of competing first and of carrying the process later. A decision that takes us to the instant in the picture. Now, two years and nine awards later it may be the moment to thank that seed on the shape of a picture that past September. 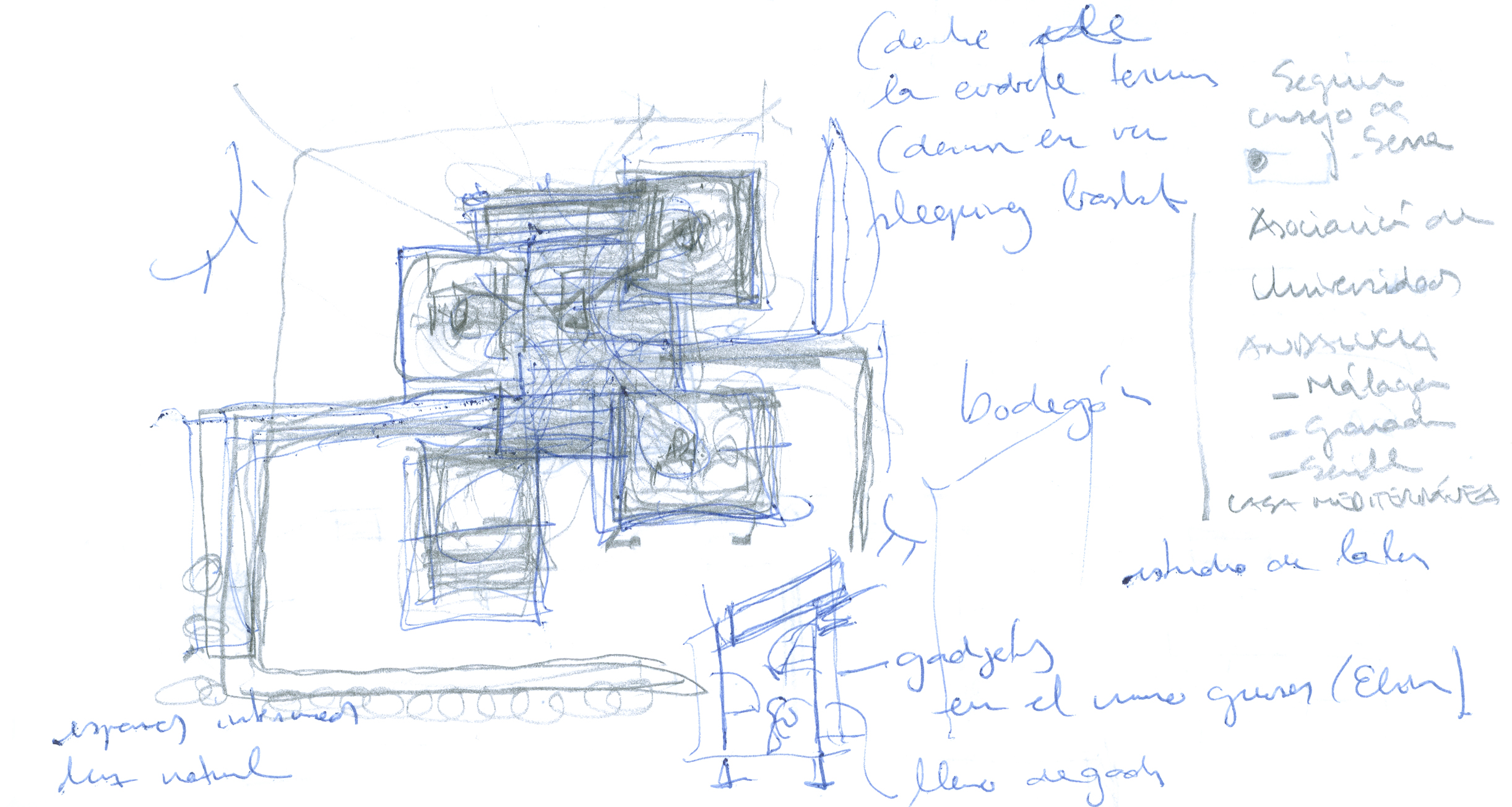