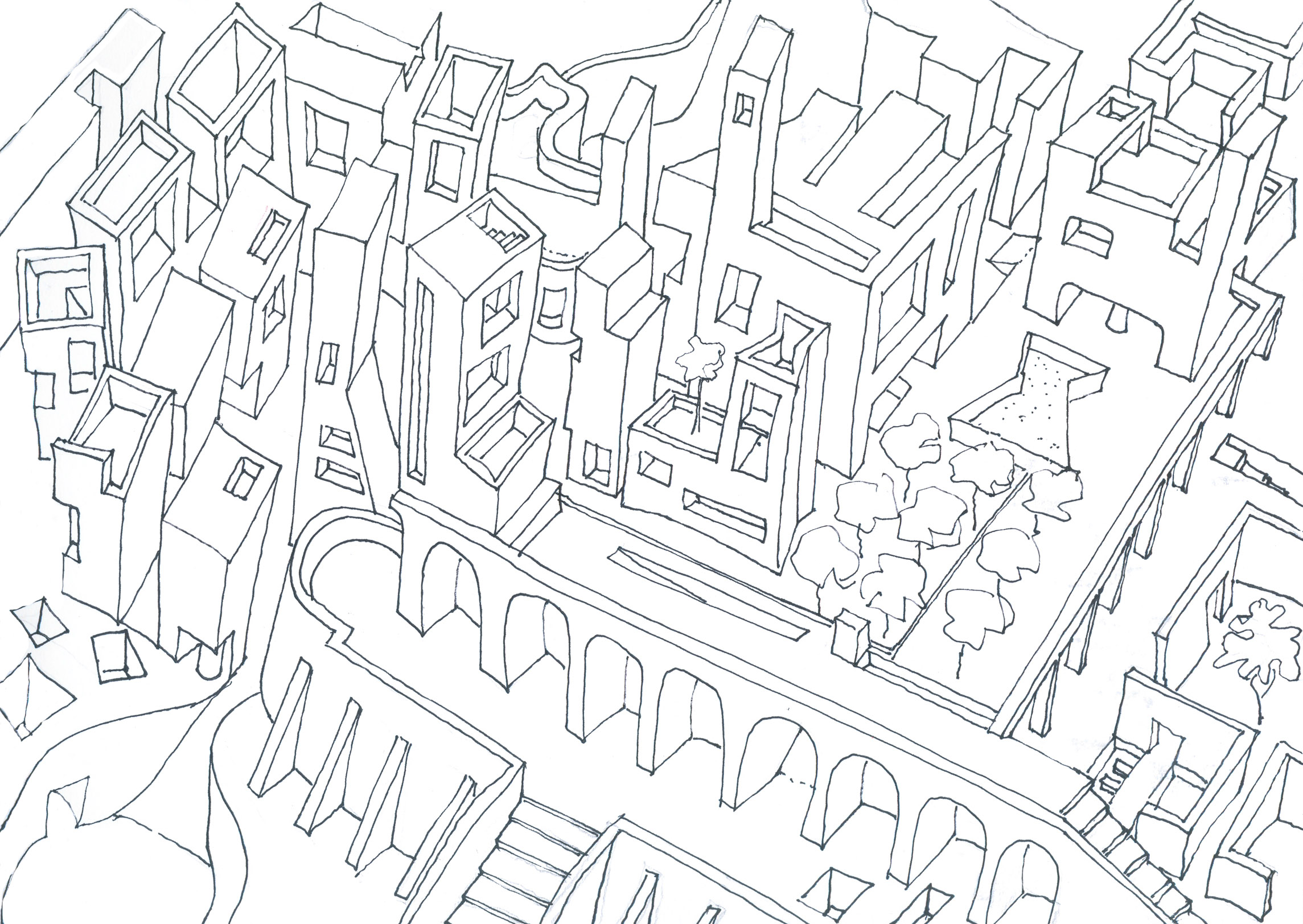 Sometimes we may take part in vague debates about architecture as an art, even when we could find a definition by the Royal Spanish Academy (architecture: art of designing and building buildings). Those most conservative ones about the essence of architectural work tend to avoid the demanding and little comforting reality from those skills needed to produce a qualified architecture.

It was discovered a draft of a description from the last invisible city of Italo Calvino (“Cacoa”) among some of his hidden files, never published and still without a proving authenticity.

Most significant of this last invisible city is that its history could help to conceive any clue about the discussion, in between of philological and bizantine, of the artistic nature (or not) of architecture. We find the transcription of the text on the following words:

Cocoa, the city of myriad drawings.

The registry of drawings office of the city of Cocoa, located on a geometrical palace on its west square, has a record of two hundred and fifty thousands of works, something out of proportion if you compare to its population of five thousands inhabitants, all of them descendants of old colonists, so its quite simple to notice the mix of races from the desert. Every visitor is astonished by the abundance of its collection. There are oil paintings, frescoes, watercolor paintings, stencil drawings, pencil drawings…and so many other techniques are gathered together filling out every corner the visitor may study, resulting in a disjointed space where it is difficult to differentiate a worthy work, due to the majority of them would not worth any attention if they were exhibit alone.

The memory of the city, as it is proved by some curious scholars trying to solve some of the reasons of its singularity, is full of memory lapses, sometimes favored by war periods at the beginning of Yant age. However, there is an agreement among scholars about the origin of that disproportionate number of works, most of them without any artistic value.

In the annals of the period before the wars there was a reputable artist association, responsible of some obscurantist and endogamous rules that hampered its true purpose. Independently from the mistrust of the association (it was a little one), it helped to improve the strictness and the rigorousness of the entry requirements for new artists and this was a famous but secretly loved condition by the inhabitants. People in charge of pictorial art were pretty unique and restricted and only a few candidates were selected to carry out works such as Xihan palace fresco (still visible today) or a landscape from the several rises of the river Qhiblan (this was the main part of the gift for Xolt emperor as reparation of the debts from war). Cacoa city was recognized beyond the mountains as the origin of the most beautiful painting of the empire.

It can not be accurately dated the year, but there is coincidence pointing out the end of the period of Yazgar governor as the time when the Council of the wise decided that the city, impoverished by droughts and Coptic prisoners on the mountains and weakened by its recent plague, needed a new type of wealth. On the other hand, imperial healers realized that those adobe walls without painting could be the origin of the plague. Everything should be covered and, if this was made with those famous paintings from Cocoa, it could be simultaneously solved those health problems and the lack of interest from caravan travelers to visit the city. The artist association only admitted an artist accompanied by two apprentice every year, resulting in a production that never surpassed five works per season, so the government ruled the creation of artistic schools in every neighborhood, with the aim of training at least eighty five new artists every year. Also, it was counted the number of apartments in the city (five thousand), each of them with an average of three facades, two rooftops, two patios, seven rooms twenty seven interior walls, fifteen windows and a four-sided shed, which led to the possibility of decorating around fifty surfaces in every home.

Two hundred and fifty thousand paintings would be necessary to make Cocoa a new jewel and an amulet against the plague.

This decision was taken more than a century ago and Cocoa city is well-known and visited by its uniqueness of that shift from its painting, now a massive and omnipresent one. At the time these words were written and as an occasion of the festivities for the river harvest (it coincided with the election of the new governor), all the masters from those painting schools agree on their results. The work of an artist is demanding and not well paid in Cocoa, but it hires so many youngsters, who quickly respond to a still rising demand. Artist, as a profession, it is not considered an art in Cocoa for some decades ago. All the masters from the different schools, except the one from Madrasa (the original artist association), consider painting as a profession, but calling it art is something old-fashioned and snob. There is no doubt about considering just a few of the multiple works from Cocoa as something related to that concept of art from those others cities in the desert.