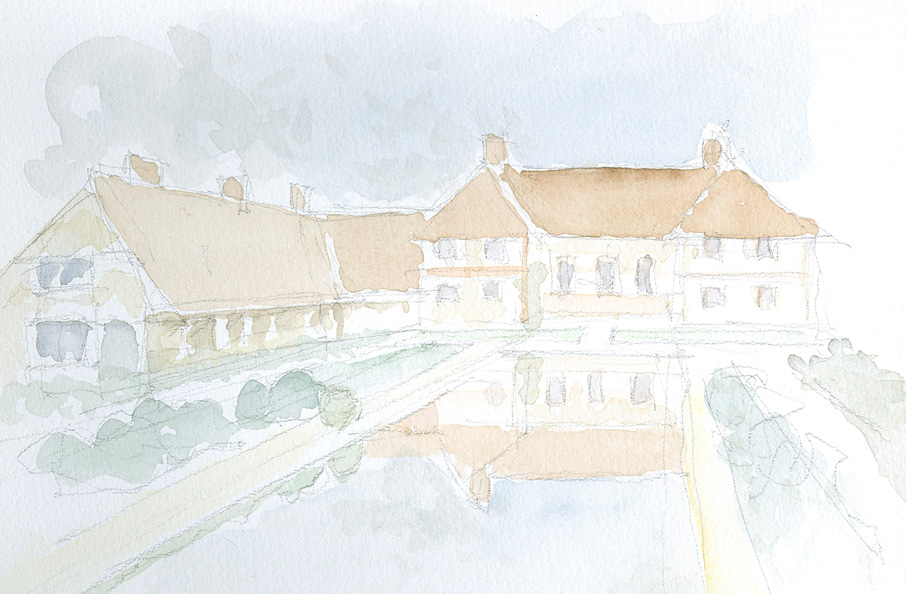 Divided between two centuries, Edwin L. Lutyens designed a series of refined country houses for English entrepreneurs, merchants and intellectuals. Revising the white and black pictures of the magnificent Houses and Gardens by E. L. Lutyens, first time edited in 1913, it calls our attention the combination of classic air, vernacular resources and distributive genius that the work reveals. There is something current, or I may say timeless, in how the previous schemes are manipulated, or betrayed, in order to adapt themselves to a program or to a landscape; in how in a classic shell an overlapping mechanism of circulations is packed, which spoils the expectations that geometry generates; how, in a subtle way, the house-object spreads its limits in the architecture of the garden, in operations extremely sensitive to orientation and topography. While Frank Lloyd Wright, his exact contemporary, prepares himself to break the box by withdrawing the architectonic archetype components, Lutyens takes the dialogue between the vernacular and the classic to a new stage, between Palladio and the English cottage, between the rational scheme of uses and circulations and the ensemble that gathers the character, the memory and the material of the English perfect house, filling his works with surprising paradoxes and memorable sequences.

We may be too used to evaluate the architectural products in relation with their coherence as objects, as we are heirs of a visual culture that freezes them in pictures and of a kind of approach which prioritizes them if they are explained by an easy initial concept or a metaphor. We mistrust dislocations, connections, additions, unbalanced or dismembered floors, without considering that it could be something good in an architecture that, instead of presenting itself, it accompanies or shelters the one who lives with elements that contradict a canonical outline. While he looks sideways at the vernacular architecture, Lutyens offers a repertoire of pieces through which the box-house embraces the visitor shelters a garden or creates exterior rooms that do not compete with a mansion that still offers a representative image. A sort of architecture full of constructed wings, not necessarily proportioned or coherent with the main body, which make the exterior and intermediate spaces habitable.

On our project for the Teatro Municipal of Arahal, the strategy of design started with the unfolding of a wing. The program of uses of a theatre is used to be surrounded by big volumes and indeed there were reasons to answer in the same way to the peripheral area of Arahal where the project was implemented, dominated by the old â€œnavesâ€ or industrial units of Hytasa, similar to big white prisms opposite to the olive grove. However, the visitor needed a shelter there where the city dilutes. On a plot without clear boundaries, the wrapper of the main room needed to unfold an arm to give limit to a new square. The unit closure that surrounds everything, a white continuous wall that folds over the hall, the room and the tower, it does but unify this juxtaposition of dissimilar gestures in a simple gesture.

On our project for the Mercado de Marisco in RÃ­o Hato (Panama), we insisted on the same resource. An installation next to the inter-American road was required, on a plot without any urban reference, where previously you could found the rests of the landing field of Rio Hato, formerly belonging to the US Army, now gone. The volume of the market room would not have been enough to receive the traveller, not even to make any sign on his way along the dual carriageway. Building another wing was necessary, an addition of reduced scale to the main part, in order to shelter the place of access. In this addition they found it easy to incorporate a restaurant, a shop of local products and a small bank branch. An advice flag, a call to the distracted driver, was added at the end over the extreme of the arm, in the shape of the announcer prism that the Government of Panama eventually built with stretched fabric. The Mercado de Marisco was built with the limited budget and means that the local economy allowed, and our sensitivity would have accepted (just at the beginning) a major coherence, tidiness or abstraction, and a major sophistication regarding details. But when each morning the room of retailers is full of visitors activity that have parked in the place of access, all these questions remain in the background. The gesture of welcoming is already built.