People do not match 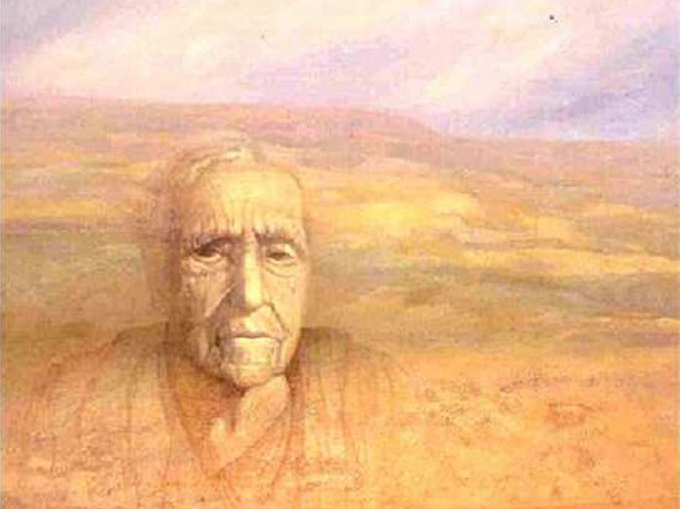 I remember José Olivares Palacios, the painter, in his drawing classes and handmade works at school. We were thirteen years old and he never taught his own work. A morning, one of us read in the newspaper an advertisement of his first exhibition in Jaen, and some of us went without advising him. In the gallery we found a collection of gloomy landscapes of olives over which the faces of country people floated. Old and wrinkled people, but mysteriously beautiful…and what does it seem to you? asked us the following week in class. I just answered: very beautiful, but it’s sad, isn’t it? The country is very sad, answered José Olivares. What I really wanted to say was not the word sad. I didn’t really have words to express the blurred impression of discovering that the paintings had created to me. I knew that from then on I would never see the olives neither the cliffs in the same way as before. The scenery had stopped being a postcard. In the furrows, in the clouds, in the cultivated rows and in the stones was the face of the people who has transformed it, those that got old with it to end up being part of it.

Daily life goes on immersed in the artificial territory of consumerism and more or less personal utopias, where perfection is a bright artist and stainless illuminated with precision. In commercial centres, just the people who combine with the scenery are the models of pictures that decorate them. The buyers are necessary intruders, but discordant in that strange codified perfection. In the pictures of architecture not even that: better if people were not there.

Accepting people and their slovenliness or the tyranny of perfection? Nobody escapes the ambiguous attitudes. Alejandro de la Sota, who sentenced that “a slovenly person cannot enter to Pabellón de Barcelona” and that “good architecture is full of withdrawals”, he manifested in other writing almost at that time his admiration to the dishabille of Le Corbusier’s work, which predisposed him against “that other repugnant perfection that covers so much defects”.

The first collaborative work with the photographer Javier Orive, to document the interaction between people and architecture was proposed in the work of 30 social housings in sector La Atalaya in Conil de la Frontera, visiting it three years later to its delivery. The choice of that work for this kind of job was intentioned. We already knew that the typology of the resource to the interior illuminated streets by courtyards, which remembered to the old corrales of Conil, had found a very interesting appropriation on the part of the neighbours. When the work was distinguished with one of the mentions of the European Prize of Architecture, Ugo Rivolta, to whom we sent the pictures of Orive as part of the research, one of the members of the jury commented later that for a moment they mistrusted the pictures. May it be a trick done with Photoshop? To that point we have finally come to believe that people just positively interact with contemporary architecture when they are virtual and inhabit in the renders.

The same kind of artistic approximation to how people superimpose to the architecture can be found in the work of Rafaela Rodrí­guez, in her report about the Emasesa building in Seville. She is also the author of a documentary called Paredes que hablan, in which three buildings of collective houses are visited with an intimate glance, among them, our work of
30 social housings in the neighbourhood of San Jerónimo in Seville. In her unhurried images show couples of grandparents, young people studying, children having breakfast…who have make the houses a place of their own. Nothing there is perfect, nothing shines. But there, contrary to what can be perceived on the posters of perfumes in commercial centres, people match..