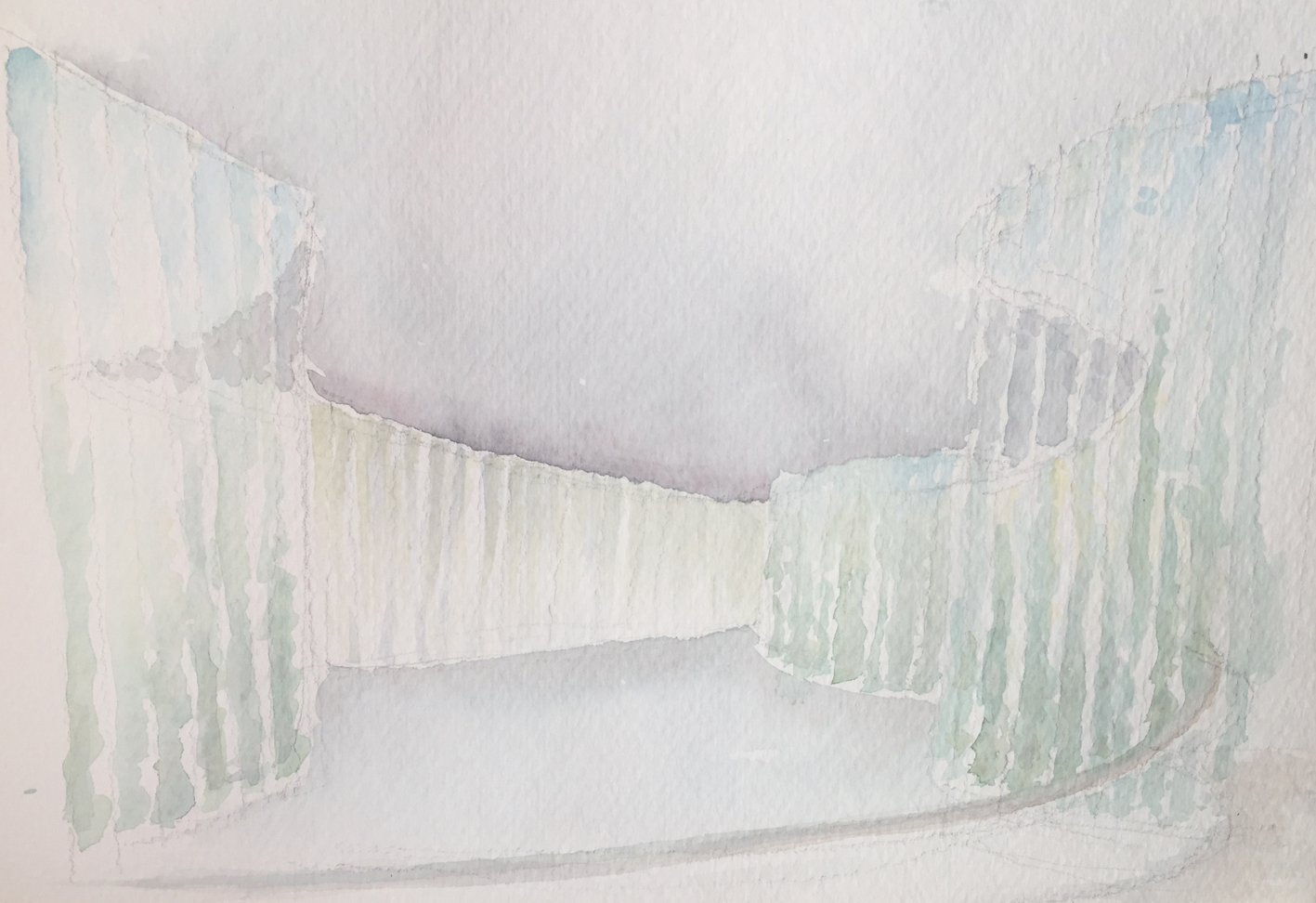 The production process for the Contest of the extension between Alvar Alto Museum and Museum of Central Finland was resolved with an idea resulting from a metaphor and an interpretation of the place and Alvar Alto style, which arises a reflection upon a rhetoric in charge of giving an explanation of architecture.

In architecture contests we work between two intellectual fields that could be determined by the following concepts. Our explanations are rhetoric, because they try to fit our aim of the project to a discourse that connects the problem to solve and the predominant canon of architecture culture. At the same time, the contest decision tries to produce a revelation, a discovery from those features implied in the place and in the program to solve and the proposal shows the most brilliant solution to the issue.

We all hope that the revelation might be a consequence of the rhetoric used or, at least, they usually try to clarify with this the project memories. Normally, the reality of the process is far from being produced from this correspondence. Why do we keep trying to combine the rhetoric almost seductive discourse with the final result (sometimes inexplicable but for his way of connecting the economy and those problems already suggested and the cultural landscape of the project)?

Like in other occasions, there are some key points from old times where we can find the origins of producing modern architecture, normally considered Leon Battista Alberti masterpiece De re aedificatoria (written in central Italy when relations between masters and builders were subjected to a dramatic change) as the starting point of modern architecture. That text could be considered as birthplace of the architect modern idea1

Alberti’s discourse about the architectural object and the architect has its origins on models and ideas adapted from old oratory, ethics and law texts, mainly from Cicero. Alberti explains his buildings using his skill to get to an audience, a declaration that shows old regards about the power (and value) of rhetoric and the art of the discourse.

It is clear that this perception depends on the architect skills to work on the material of a composition as the power of a discourse depends of the orator skills regarding the election and emission of words.

Alberti states the presence of the architectural object with a specific persuasive quality when introducing the concept of beauty in architecture. This quality differs from the physical appearance of the building and its existence is an evidence of the will and the mind of a single author. Here comes the architect as co author.

It is of a vital importance to understand this union between architecture and rhetoric in terms of persuasion. “Albertian” architects go apart the two main origins of authority, that traditionally guided every architectural project: the authority of a master builder on the ground and the authority of the employer. Alberti determined a structural distinction between the building as a physic space (constructor domain) and the building as an idea (architect domain) and he stated that architects do not “make up” buildings, they represent them. These representations have an uncertain authority, because “having other hands than yours working on what you have conceived is harsh”.

Distance declaration between Alberti’s thought and work is uncertain. Once the superior authority over construction works is doubt, there is a risk that other voices conditioned actions in charge of the built world.

To fill out the absence of authority resulting from this new position, architects should (following Alberti characterization) use even more the rhetoric. Alberti’s formation in oratory and law not only determined an explanation of how a masterpiece works but how architects should work.

The potential use of visual representation as a rhetorical tool4 is implicit on the plot of De re aedificatoria (although it is invisible to the text).

Alberti created an important equivalence between architect and work, where he attributes to both a responsibility to define places in the world through persuasion. Once he shared his logical conclusion, this double responsibility created a precedent within architectural discourse for a final idea arising again in the 20th century: context. Being persuasive in oratory depends on internal logic and on a balance of composition, but it also depends, mainly, on the experience of surrounding composition. Thus, it depends on its adjacent surroundings or on a wider tradition of actions and location.

“Decorum” (modesty, pertinence, correctly) is a requirement in oratory that helps the relation between composition and context to make it persuasive. Persuasive skills are found throughout most known explanations of Antiquity (specially those from Cicero) and they take shape in context, which helps, as well as proper actions, its modesty nature. This assumption is used when talking about “appropriate action” in architecture, what means that something that is appropriate in a specific place may it not be in another one (due to the relation between architectural action and context).

Context in the mentioned Contest for the enlargement of Alvar Aalto Museum and Museum of Central Finland seemed to help bringing “modesty” to the proposal, with a natural connection to that context, as a way to justify it. Its motto “Snow upon the Woods” could be perfectly read from that perspective: it may refer to the wood spatiality as an intimate inspiration of Aaltian language such as the snow (symbol of the extreme climate that determines that place) and our perception of it (an unusual phenomenon for a southern team).

A way to resolve the contest basic program (to connect two museums and a cafeteria) is produced from a formal suggestion of a snowed wood: the new building cover is a surrealist bowl that feigns a batter of this snow cloud, a not everlasting snow, because it is blended on the warm station and its change of state (the water slides through the glassy walls of circular patios) is shown as a show to the visitor. Sinuous topography of the interior drawing is shown as a landscape of solidified rural paths.

Contest architecture would like to disclose something that was always present but it is not shown until the project is produced. In other words, we would like to think that a competitive system helps to find the most revealing project and we also tend to consider that rhetoric helps to find that disclosure when, in most cases, it just justifies that he discovery comes from other part of a dream.