Where we will talk tomorrow 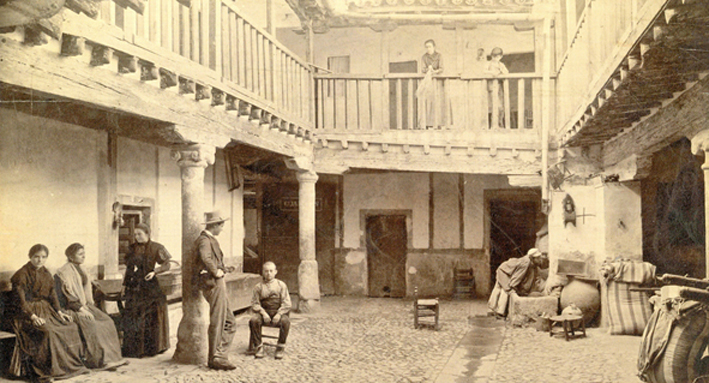 June 1978, the magazine 2C. Construction of the City from Barcelona published a monographic number titled â€œRegarding the Sevillian houseâ€, as time went by it resulted a worship text related to educational work in the School of Architecture in Seville. In its pages, a group of professors of the subject â€œElements of Compositionâ€ outlined the first typological analysis of residential systems in the historical city of Seville (casa-patio, corrales, casas de vecinosâ€¦) which probably will be in the fondness of all of us who practice architecture in this city feel of the intermediate spaces, because of our â€œwill to define the collective space in an ambiguous relationship with the street and the city. A certain relationship of fluency, in the editorsâ€™ words of that number.

This romantic relationship with intermediate spaces, and this nostalgic future, where people will relate each other as in our idealized past of corrales and neighboursâ€™ houses, is not only of the 70s theorists from Seville. All generic texts about architecture of a recognized European author like Herman Hertzberger rest on the idea that what really deserves attention in the works of architecture occurs in-between areas where it is difficult to delimit what is inside and what is outside. I perceive in all of that a necessity almost psychological of covering a lack which our competitive and individual societies, prioritizing short individual stories over the epic of the group, are depositing in our biographies. In some of the writings by Robin Evans, he meditates on what we may have lost in our way when the author analyses Renaissance tales, where the settings of multiple gates encouraged promiscuous and funny tales. In other ones it is described how the proliferation of rules about housing, justified by hygienic reasons, might be hiding the fear to mixture, contact, unexpected events, interpersonal and familiar implications.

In Tirso de Molinaâ€™s La celosa de sÃ­ misma, the neighbour who visited a friend in one of the neighboursâ€™ houses at Madridâ€™s Plaza Mayor, describes an adventure in a simple itinerary from the ground floor to the loft: â€œDe modo que lleguÃ© a ver / en una casa, en un dÃ­a / bodas, entierros y partos, / llantos, risas, lutos, galas / en tres inmediatas salas, / y otros tres continuos cuartos, / sin que unos de otros supiesen, / ni dentro de una habitaciÃ³n, / les diese esta confusiÃ³n / lugar que se conociesenâ€. Is anything left behind when we set out for a future where virtual relations rule, where the place that we could touch is substituted by the virtual space provided by computers, and where in order to progress, professionally speaking, in order to relate with other people, to flirtâ€¦you just need the sense of sight and a computer screen? What about the physic space? Where will we talk tomorrow?

In the work of 22 housings for young and seniors at Divina Enfermera Street in Seville we assume enthusiastically the task of building a corral de vecinos of our own time. There are only social housings, made with adequate materials for a renting use which require an easy maintenance and conservation, with a visibility of translucent layers that are definitely modernâ€¦ but they form a corral after all. We could justify it by saying that it was the most valuable manner of resolving the programme, that the distribution of a unique gallery, which embraces the central space, allows that just one elevator solves vertical communication, that gathers all the free space in a unique courtyard providing a nice expansion in the bosom of a urban knitting too compactâ€¦but the ambiguous relationship of the street with the threshold and the courtyard, the fluency between the public outside and the half-private inside, the proportions of empty spacesâ€¦they all speak about the existence of a previous idea, something that may have its seed in those writings about the Sevillian house back in 1978.