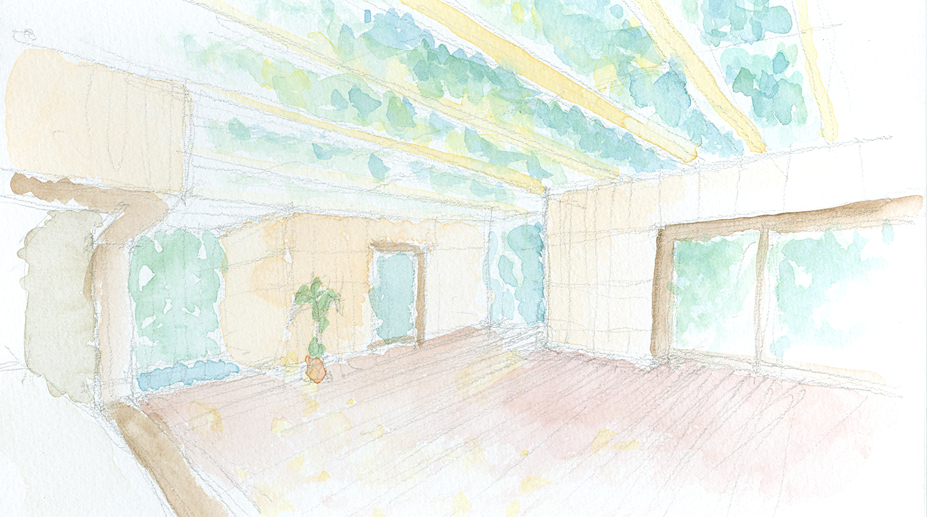 The memory of our past days working with “Patio 2.12″ fades away while new projects begin, which germinate after its tail… It seems that one of the members of the international jury of architecture, who made one of the ten evaluations of the prototypes, maintained that “that was not a courtyard”. He is probably right- While the Andalucia Team met each day at the central space, at the shadow of the sun of September the first weeks, or sheltered from the rain, they were using it and perceiving it like one more room of the house. The most spacious and the most appealing those days, according to its intensive occupation. In contrast with the other four “interior” rooms, that space did not get “conditioned”, or it did just partially, using the changeable configurations of its walls and ceilings.

We sometimes explained the courtyard by describing it like a shock- absorber of the rest of the rooms of the house, the intermediate step between the rooms and the landscape: the first line of defence, which reduces the energy requirements of the rooms that lean over it as a previous step, before getting into contact with the outside.

The idea of gradation at the level of acclimatization of the house does not seem to be today well established in the conscience of urban users. All the rooms should have the same provisions. Nonetheless, the vernacular architecture in all latitudes, more sensitive to the limitations of the available means, offers a lot of examples of this gradation: everything is not equally acclimatized. The intermediate spaces of the Mediterranean tradition are appropriate as rooms just for some hours of the day or for some seasons of the year, but they always form that half-acclimatized mattress that defends the rest of the areas.

Some of the more significant utopic projects that came to light out of the libertarian experiments of the 60s and 70s (Archigram, Friedman, Archizoom, Fuller…) set out the possibility of using the technologies of construction of big-scale shells to generate acclimatized areas, protected from the most extreme harshness. The bubble Buckmister Fuller imagines placed on the central area of Manhattan Island is the extreme instance of that point of view, which the author wanted to see materialized with the help of the technique of his geodesic domes, knitted by glass and metallic bars in ethereal structures. The New Yorker dome of Fuller remained as a photomontage, but something of its legacy can be seen in a building that rises precisely in the inside area that the half-sphere of glass was to shelter. At 43 Street the Ford Foundation stands, a granite and glass cube builded by Kevin Roche and John Dinkeloo in 1968. There, most part of the built volume is air, but confined air inside the giant intermediate room, a green and glass atrium from which the rest of the rooms are opened, the offices of the Foundation, which are not orientated directly to the street but to that “non-acclimatized”.shock-absorber.

Our proposal for the Competition for the Central Offices of Urban Management in Seville was, in a way, in debt with those environmental utopias and with the memory of the intermediate Mediterranean spaces that still form part of our collective subconscious. A big-scalen artificial trained vine would conform a prism of the size of an area such as the Isla de la Cartuja and at the inside the adjusted air (shading-ventilated in the summer and sunny-hermetic in the winter) would act as a shock- absorber in contrast with the “untamed” environment outside. The rooms of the Central Offices of Urban Management would remain in within the small, independent, and transparent buildings in a way that reminds of a covered citadel, like the geodes of Fuller, by means of an ethereal structure of thin, adjustable bars and glasses, but in this case complemented with a system of changeable shadows. Autonomous open boxes to a shock-absorbing habitable space… A “Patio 2.12″ at a metropolitan scale.